The current outstanding federal debt is almost $22 trillion dollars. The debt to gross domestic product (GDP) ratio is 105.27%. In other words we owe more than our entire economy generates.

It is highly unlikely the US will ever again not have deficits or debt and most economists agree some debt is not bad. However, even liberal economists have their limits when the GDP to debt ratio exceeds 100%. The main reason is that in the event of an emergency such as the Great Recession or worse, there is less room to increase the debt without risking a crisis.

During WWII the debt ratio peaked at 117.5% and then steadily declined to a low of 32.5% in 1980. Since then it has climbed steadily under Reagan, Bush, Clinton, Bush and Obama and now Trump and is headed off the charts.

There are only two options to deal with debt; increase revenue or decrease expenses. Increasing revenue comes from a growing economy or raising taxes.

In 2019 there are calls from the American left to raise taxes, at least on America’s wealthy whose definition varies based on the politician. But here’s the thing, those higher taxes are not going to offset our deficits and debt, but to new programs such as a green environment effort, free college, expanded Social Security, M4A and more.

Prudent financial management seems out of fashion theses days both at the individual and government level. We have mortgaged our future, we have traded necessities for wants and desires … and there are consequences for individuals and for society.

You don’t have to be an economist to know this isn’t going to turn out well. 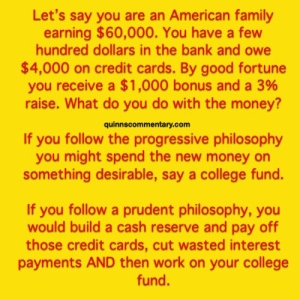