The United States is at a growing risk from legislators and their supporters who have little regard for fiscal responsibility and the serious consequences for irresponsible deficit spending.

Democrats are in a debate over PAYGO, a law that simply requires new government spending be paid for. In other words not further increase the deficit and federal debt. When they opposed the Trump tax cuts on the basis it would explode the deficit, Democrats had a valid point. Now we face a much greater danger.

Progressives in the Democratic Party oppose PAYGO on the basis it will inhibit advancing their agenda for expanded social programs. They and their supporters argue the debt is not a big deal; the government can simply print more money, interest rates are low and they claim the risk of inflation is not an issue. Some socialists such as #AOC simply want to raise income tax levels to 70% or higher seeing no adverse consequences. All these positions are naive, shortsighted, and irresponsible and if generally accepted, puts the United States at great risk.

The Progressive/socialist strategy also deceives Americans by masking the true cost of their agenda and shifting a massive liability to future generations.

In fiscal 2018 the federal government spent $523,017,301,446.12 on interest payments (over half a trillion dollars). This includes nearly $88 billion paid to the Social Security Trust and $9.8 billion to the Medicare Trust.For over a decade the Social Security Trustees and Medicare Trustees have been urging Congress to act on making the programs solvent. The urging has been ignored. While we talk about new programs, expanding programs, we fail to deal with existing ones.

What else can we expect from progressives who insist on telling Americans that Social Security has a surplus knowing that is not true?

Even the IMF warns against an increasing debt burden while cautioning against overuse of austerity:

While some countries (Greece, Italy, and Japan, for instance) urgently need to reduce their high debt loads, the deputy director of the IMF’s research department, Jonathan Ostry, and colleagues Atish Ghosh and Raphael Espinoza, argue that others (including the U.S., Germany, South Korea, and Australia) can and should fund themselves at today’s exceptionally low interest rates and live with their debt but allow the ratio of debt to GDP to decline over time as their economies grow or revenue windfalls occur. (To be clear, that still requires some fiscal discipline to avoid big annual budget deficits that would add to the debt burden.) Source: International Monetary Fund

The Congressional Budget Office takes a broad, long-term view of the risk

Large and growing federal debt over the coming decades would hurt the economy and constrain future budget policy. The amount of debt that is projected under the extended baseline would reduce national saving and income in the long term; increase the government’s interest costs, putting more pressure on the rest of the budget; limit lawmakers’ ability to respond to unforeseen events; and increase the likelihood of a fiscal crisis. (In that event, investors would become unwilling to finance the government’s borrowing unless they were compensated with very high interest rates.). Source: Congressional Budget Office June 2018

Even Paul Krugman differentiates between deficit spend during a crisis and at other times.

… But back to deficits: the crucial point is not that Republicans were hypocritical. [opposing deficits during recession while increasing them through tax cuts] It is, instead, that their hypocrisy made us poorer. They screamed about the evils of debt at a time when bigger deficits would have done a lot of good, and are about to blow up deficits at a time when they will do harm. Paul Krugman NYT June 2017

Warnings about our growing debt come from many sources. 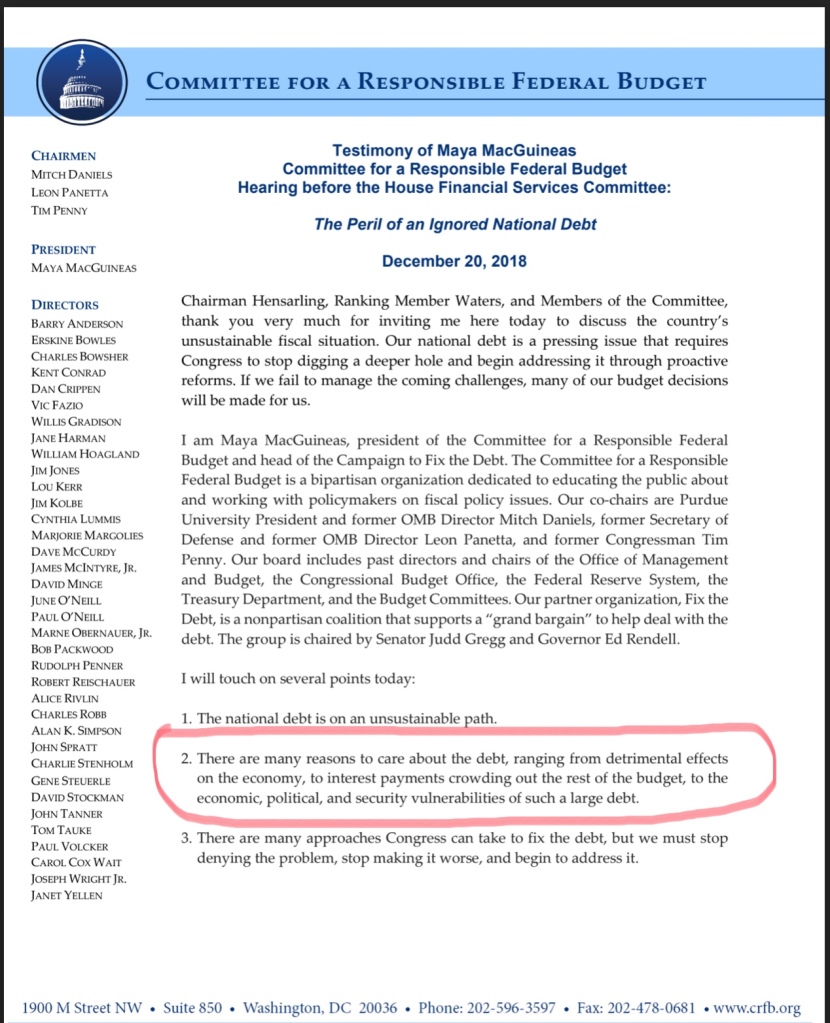 Growing deficit and debt does matter.